bywpincyma
You are here:
< Back 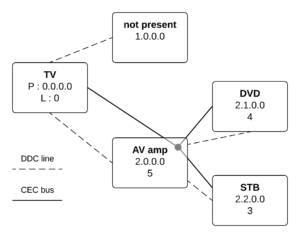 Within HDMI-CEC, devices are of two kinds, TVs and switches inputs (named sinks) and playback device, recording device, switch outputs …  (named sources). By definition of the HDMI specification, there is only one TV or display within a CEC bus. Most seems to be not that keen on being controlled. Players or recorders, however, definitely support quite well to be controlled.

Only one TV is supposed to be part of the bus (with the physical address 0.0.0.0). But a TV at a physical address other than 0.0.0.0 shall try to allocate the ‘Specific Use’ (14) address. If address 14 is already allocated it shall take the ‘Unregistered’ Logical Address (15).